We started at London St Pancras where we boarded the Eurostar to Paris. On arrival at Paris we walked the short walk to Gare D'Est where we boarded an ICE to Frankfurt for an onward train to Erfurt. On arrival at Erfurt we had dinner at a restaurant close to the hotel. As staying at an InterCity Hotel gives you free access to the local transport network, I went for a quick tram ride to round of the day.

All modern trains today, but these we taking us east to where we would find some steam! 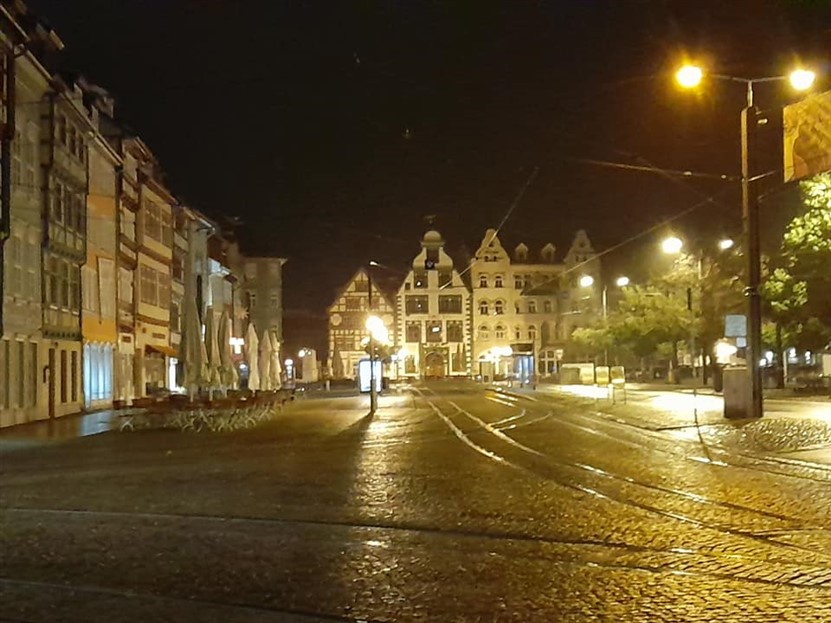 Another high-speed journey took us from Erfurt to Dresden where the hotel was a short walk away. That afternoon we caught the double decker DB Rego train hauled by 146 213 to Radebeul Ost. The Lössnitzgrundbahn still runs steam daily including a school train every morning therefore can claim to be one of the last steam commuter trains in the World. Despite it regular daily passengers the line also cater for tourists with a roofless carriage per train. Sitting in this carriage, hauled by 99 1761 was a great experience as you could see and hear the whole journey from a different perspective from sitting inside a usual carriage. As the train departs Radebeul Ost the locomotive rings the bells as the first 3/4 mile runs down the public streets and crosses Dresden Tram Route 4 before climbing up into the hills for the run to Radaburg. At Radaburg the loco runs round and takes water before working the train back to Radebeul Ost where we catch a DB Rego train back to Dresden hauled by 146 025. 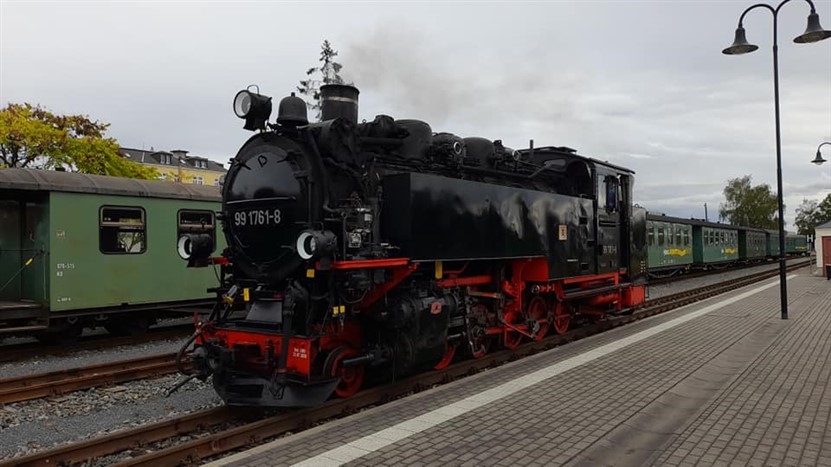 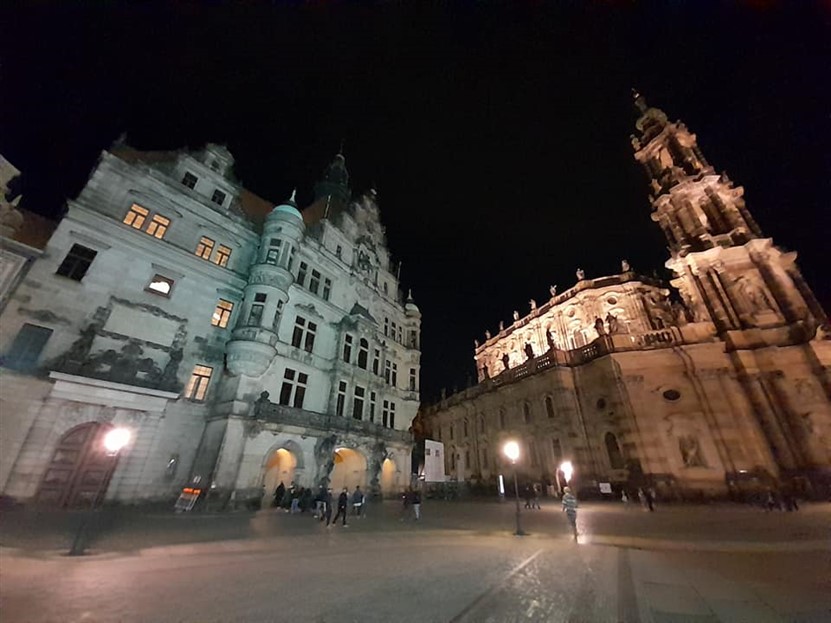 We caught a DMU from Dresden for the scenic trip up to Zittal, close to the Polish border. On the way the line also cuts through a corner of the Czech Republic. At Zittal we boarded a steam hauled train on the narrow-gauge railway hauled by 99 1760 for a trip up to Bertsdorf, the junction station where lines go off to Kurort Oybin and Kurort Jonsdorf. Here we found 99 758 and we were able to watch the double departure as both trains headed up to their designations. We were given a tour of the shed where we saw a few more of their locomotives. Next, we took the train up to Kurort Oybin where we had a lovely lunch at a local hotel. We then travelled back to Zittal where we had another trip over the line, this time up to Kurort Jonsdorf behind 99 758. 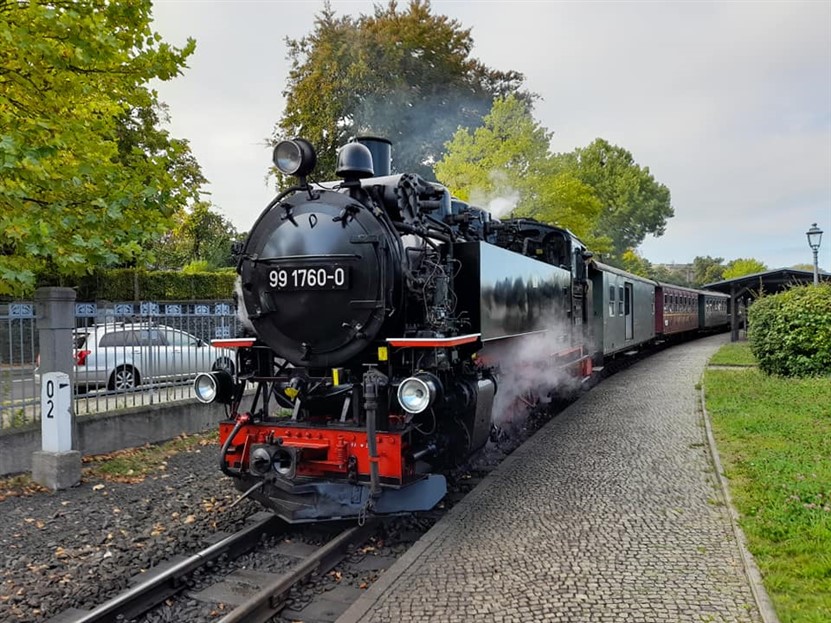 Day 4 - A full day at the fabulous Dresden Steam Festival

Today was the start of the Dresden Steam Festival, the event the tour was built around.

We took a coach to Dresden Alstadt where the festival was taking place. One of the 1/4 roundhouses here is a working museum where main line steam locos are serviced. We started with a look in the shed where the reserve collection of the Dresden Transport Museum is housed, not normally open to the public. We then made our way through a 1/2 roundhouse with static steam, diesel & electric locos housed as well as some road vehicles. Down at the working 1/4 roundhouse was the place to spend most of the day however as steam locos were coming on and off shed and 52 8154 was doing footplate rides up and down the yard. I also stayed on for the night shoot where we saw the locos by night and the arrival of 01 202 from Switzerland. 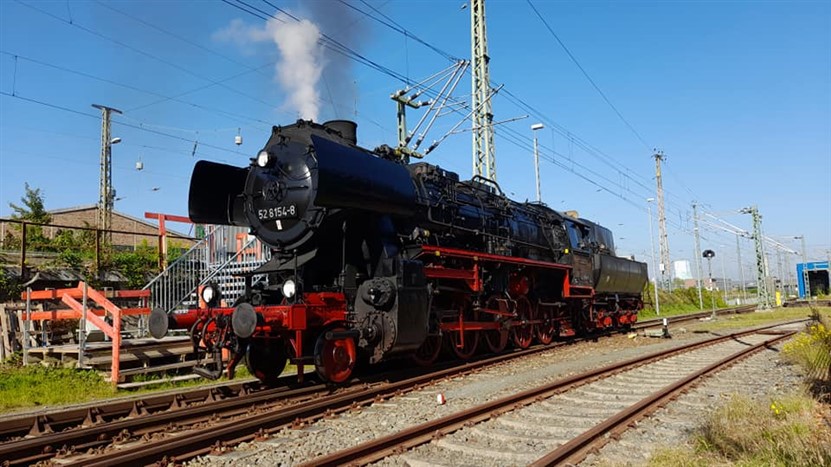 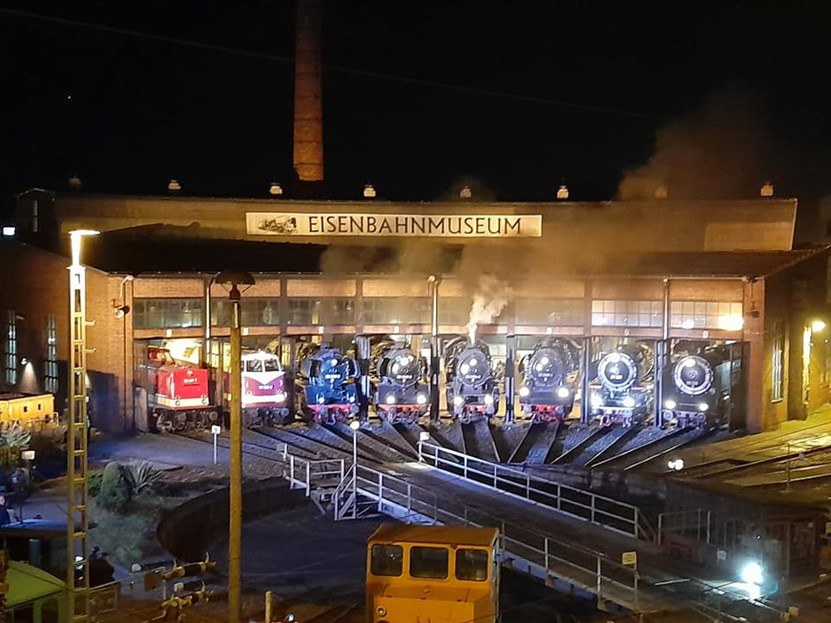 As part of the Dresden Steam Festival a number of steam hauled rail tours were run.

This morning we were on a tour to Chemnitz hauled by 01 202. The outward run took as via the railway backwaters of Nossen and Doblen. On the way we saw a man posing his Trabant at various level crossing the get a picture of this classic car with the steam special. On arrival at Chemnitz 50 1036 backed onto the train to take us back to Dresden via the direct route.

Then in the afternoon we took another main line steam run to Senftenburg which took us via some freight only lines giving the track bashers a change to get some rare track.

There was also a night train to Cottbus which didn't return to Dresden until 2am so this wasn't included in the tour but some of the group returned to the main station at 7pm to see the train depart into the night! 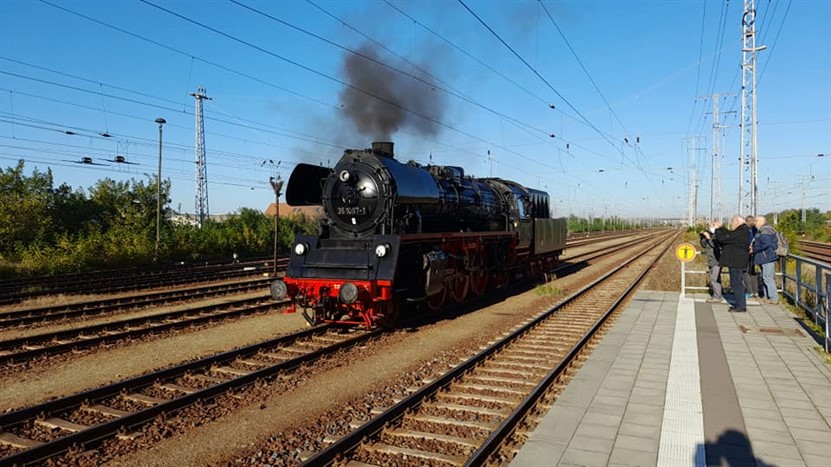 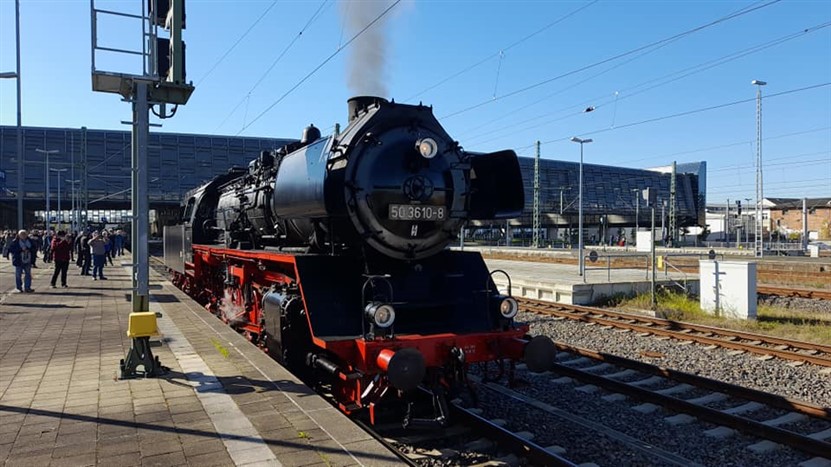 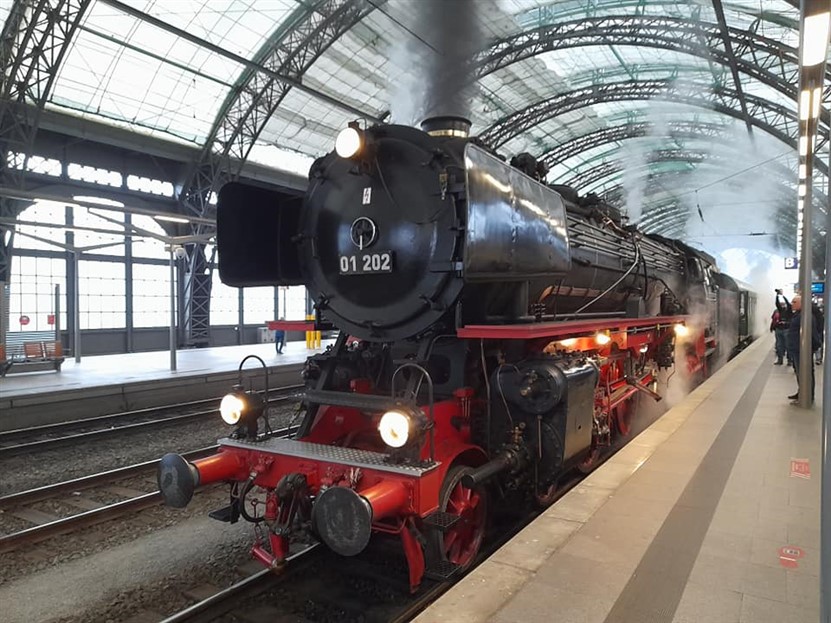 This morning was the highlight of the tour for many. We departed Dresden on another steam hauled rail tour although this time we weren’t going so far but were about to witness a specular show!

35 1037 was on the front of our train again, a few miles from Dresden we arrived at Tharandt Station, the foot of an incline on the main line to Chemnitz. Soon 50 3648 pulled in with a coal train and we departed for the parallel run up the incline. Having 50 3648 running right next to us working hard as a specular site, I've seen main steam train in my life but to run next to one was specular! Once we arrived at the top of the incline we carried on to Freiburg (not the city in the Black Forest although I have also been there with Railtrail). At Friberg we were hauled back to Dresden by a vintage electric E77 10.

That afternoon we were on another rail tour around the freight only lines in Dresden and then a run up the scenic branch to Neustadt. This time we were hauled by 50 3648 again and heritage diesel 122 481 was on the rear as this tour had quite a few reversals. 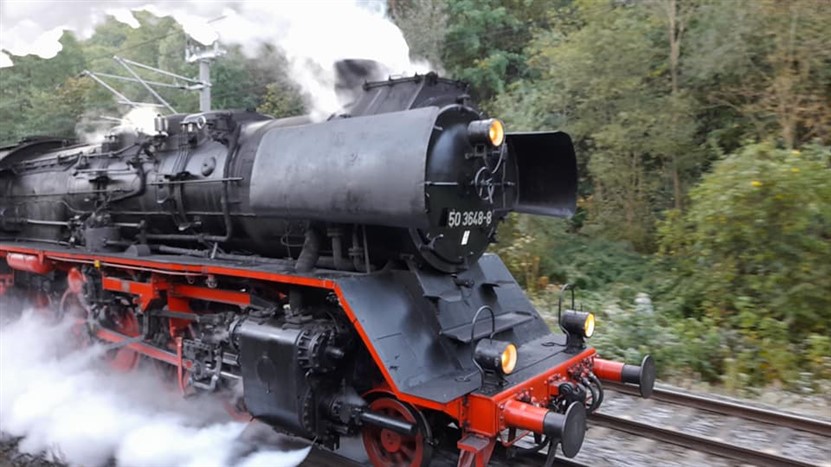 Day 7 - Steam Charter on the Döllnitzbahn

Back to narrow gauge we travelled to Oschatz where we had a private charter on the Döllnitzbahn hauled by Saxon Mayer 99 584. Like at Radabeul the line runs through the streets of the town before heading out into the countryside. We stopped at couple of locations to photograph the train and we had a false arrival at one of the wayside stations. At Mügeln, which was once the largest narrow-gauge station in Europe we stopped for lunch and a look around the sheds. That afternoon we continued to the two terminal stations giving a chance to photograph the engine on each branch before heading back to Dresden. 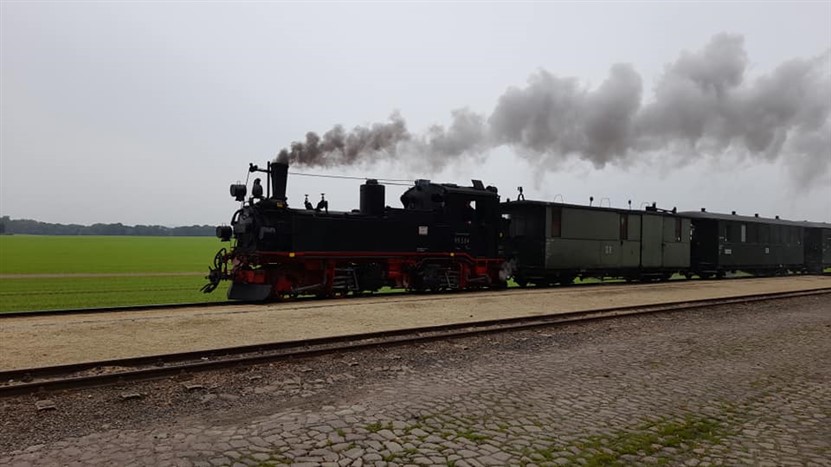 An early start and a trip behind DB eclectic loco 101 038 to Leipzig. At Leipzig we had the chance to visit the museum platform, which has a steam loco, The Flying Hamburger and some vintage electric locos on display. It is not often you visit a railway museum before 7am! From then on it was modern trains back to Paris and London, enjoyed the views as we went.