Devon is a county of England, reaching from the Bristol Channel in the north to the English Channel in the south. It is part of South West England, bounded by Cornwall to the west, Somerset to the north-east and Dorset to the east. The city of Exeter is the county town. The county includes the districts of East Devon, Mid Devon, North Devon, South Hams, Teignbridge, Torridge and West Devon. Plymouth and Torbay are each geographically part of Devon. Devon's area is 2,590 square miles and its population is about 1.1 million.

The north and south coasts of Devon each have both cliffs and sandy shores, and the county's bays contain seaside resorts, fishing towns and ports. The inland terrain is rural, generally hilly and has a lower population density than many other parts of England. Dartmoor is the largest open space in southern England, at 368 square miles.

The key train operator for Devon is Great Western Railway, which operates numerous regional, local and suburban services, as well as inter-city services north to London Paddington and south to Plymouth and Penzance. Other inter-city services are operated by CrossCountry north to Manchester Piccadilly, Edinburgh Waverley, Glasgow Central, Dundee, Aberdeen and south to Plymouth and Penzance; and by South Western Railway, operating services between London Waterloo and Exeter St Davids, via the West of England Main Line. All Devon services are diesel-hauled, since there are no electrified lines in the county.

Torquay - Torquay is a seaside resort town on the English Channel in Devon, south west England. Known for beaches such as Babbacombe and cliffside Oddicombe, its coastline is nicknamed the English Riviera. Torquay Harbour near the town centre offers shops, cafes and a marina. Torre Abbey, a monastery founded in 1196, has art galleries and extensive gardens featuring plants from local writer Agatha Christie's novels. https://www.englishriviera.co.uk/explore/the-english-riviera/torquay

South Devon Steam Railway - The South Devon Railway is a 6.64 miles heritage railway from Totnes to Buckfastleigh in Devon. Mostly running alongside the River Dart. https://www.southdevonrailway.co.uk/

Dartmouth - Dartmouth is a town and civil parish in the English county of Devon. It is a tourist destination set on the western bank of the estuary of the River Dart. https://discoverdartmouth.com/

River Dart Cruises - The famous and award winning ROUND ROBIN tour is the best way to explore South Devon ... Dartmouth and the River Dart, Kingswear and Totnes on your day out! https://www.dartmouthrailriver.co.uk/tours/round-robin

Lynton & Lynmouth – are two villages in Devon, England, on the northern edge of Exmoor. The village straddles the confluence of the West Lyn and East Lyn rivers, in a gorge 700 feet below Lynton, which was the only place to expand to once Lynmouth became as built-up as possible. The villages are connected by the Lynton and Lynmouth Cliff Railway, which works two cable-connected cars by gravity, using water tanks. https://visitlyntonandlynmouth.com/ 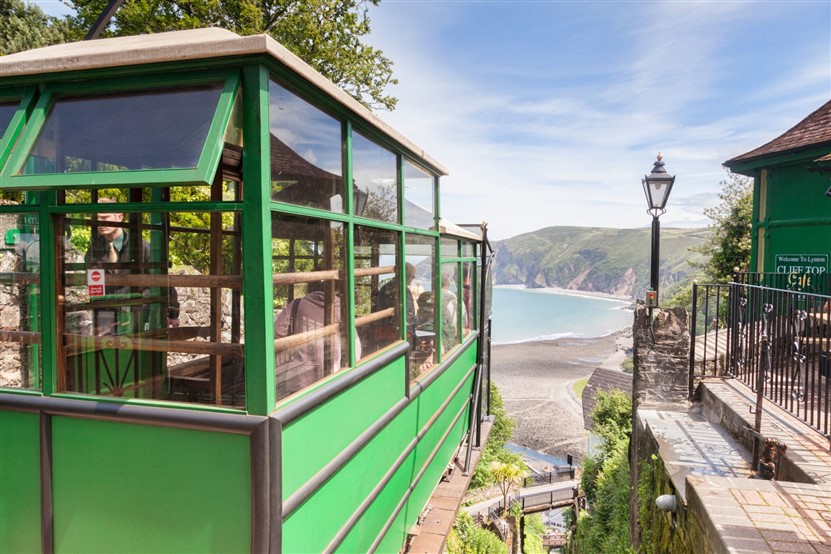 Lynton & Barnstaple Railway - Woody Bay, within the Exmoor National Park, is a station on the former Lynton and Barnstaple Railway,  narrow gauge line that ran through Exmoor from Barnstaple to Lynton and Lynmouth in North Devon. The station was situated inland, about 1 1/2 miles from Woody Bay itself. https://www.lynton-rail.co.uk/

Ilfracombe - is a seaside resort and civil parish on the North Devon coast, England, with a small harbour surrounded by cliffs. The parish stretches along the coast from the 'Coastguard Cottages' in Hele Bay toward the east and 4 miles along the Torrs to Lee Bay toward the west. The resort is hilly and the highest point within the parish boundary is 'Hore Down Gate', 2 miles inland and 860 feet above sea level. https://www.visitilfracombe.co.uk/