Cheshire is a county in the northwest of England. It is bordered by Merseysideand Greater Manchester to the north, Derbyshire to the east, Staffordshire and Shropshire to the south, and the Welsh local authorities of Flintshire and Wrexham to the west. Cheshire's county town is Chester, while its largest town by population is Warrington. Other major towns include Crewe, Ellesmere Port, Macclesfield, Northwich, Runcorn, Widnes, Wilmslow, and Winsford.

The main railway line through the county is the West Coast Main Line. Trains on the main London to Scotland line call at Crewe (in the south of the county) and Warrington Bank Quay (in the north of the county). Trains stop at Crewe and Runcorn on the Liverpool branch of the WCML; Crewe and Macclesfield are each hourly stops on the two Manchester branches.

The major interchanges are:

In the east of Cheshire, Macclesfield station is served by Avanti West Coast, CrossCountry and Northern, on the Manchester–London line. Services from Manchester to the south coast frequently stop at Macclesfield.

Chester - is a very pretty and historic English city on the river Dee in the North-Western county of Cheshire. It's well worth a day trip to see the Roman walls and see the market town. This fine city is also the gateway to North Wales, standing as it does directly on the border with the Principality. It is the nearest city of any size for a sizeble population in North Wales. https://www.visitcheshire.com/chester

River Dee Cruises - Enjoy a relaxing and informative cruise along the River Dee in Chester. With informative commentary and bar and toilet facilities. https://www.chesterboat.co.uk/

Anderton Boat Lift - The Anderton Boat Lift is a two caissonlift lock near the village of Anderton, Cheshire, in North West England. It provides a 50-foot (15.20m) vertical link between two navigable waterways: the River Weaver and the Trent and Mersey Canal. The structure is designated as a scheduled monument, and is included in the National Heritage List for England.

Manchester Ship Canal - The Manchester Ship Canal is a 36-mile-long (58km) inland waterway in the North West of England linking Manchester to the Irish Sea. Starting at the Mersey Estuary near Liverpool, it generally follows the original routes of the rivers Mersey and Irwell through the historic counties of Cheshire and Lancashire. Several sets of locks lift vessels about 60 feet (18m) to the canal's terminus in Manchester. Landmarks along its route include the Barton Swing Aqueduct, the world's only swing aqueduct, and Trafford Park, the world's first planned industrial estate and still the largest in Europe.

Pontcysyllte Aqueduct – Around 20 miles from Chester and pronounced Pont – ker – sulth – tay. Is the Welsh name for ‘the bridge that connects 11 miles of stunning canal and countryside spanning two countries, along aqueducts, tunnels and viaducts. 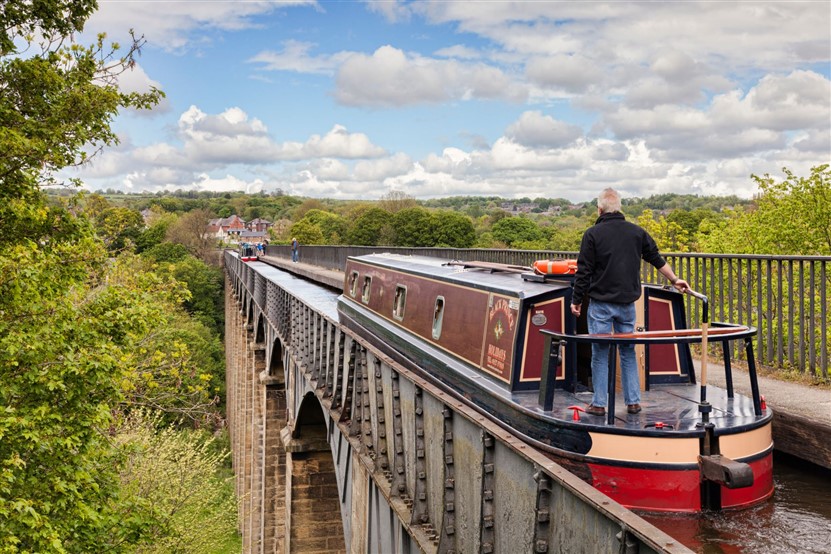 Llangollen Railway – Around 25 miles from Chester – A volunteer run heritage railway in Denbighshire, North Wales, which operates between Llangollen and Corwen. The standard gauge line, which is 10 miles (16km) long, runs on part of the former Ruabon - BarmouthGWR route that closed in 1965. It operates daily services in the summer as well as weekends throughout the winter months, using a variety of mainly ex-GWR steam locomotives as well as several diesel engines and diesel multiple units. A2+1D2 miles (4km) extension of the railway has been built to complete the line to Corwen.

Please visit here for all Railtrails' Cheshire Tours, we are sure you will not be disappointed!